Doctor in Fine Arts from the University of the Basque Country / Euskal Herriko Unibertsitatea. He is currently a Professor in the Department of Art and Technology and academic secretary of the Department of the Faculty of Fine Arts, UPV / EHU. His field of work is Sound Art, investigating and experimenting in the resources and artistic possibilities of the spatial properties and dimensions of sound.
He has exhibited and shown his work in numerous places among which include: ‘Sound art in Spain (1961-2016)’ Fundación Juan March, Vostell de Malpartida Museum – Cáceres, the SCENE CONTEMPORARY festival, Círculo de Bellas Artes de Madrid (2005) ), the 32nd Festival of Electroacoustic Music and Electronic Creations of Bourges, (2005), the ARBORESCENCE International Festival in Aix-en-Provence (2005), the first Spanish Sound Art exhibition (MASE) at Senxperiment 06, Cordoba (2006) , the thematic exhibition TABAKALERA SUENA, Fundación Tabakalera, Donostia (2009), or in ARTISTS AS CATALYSTS, by Ars Electrónica in the center of La Alohondiga in Bilbao (2013)
In 2004 he won the first international prize in the category of Sound Installations and Environments of the 31st Concours International de Musique et d’Art Sonore et Electroacoustiques de Bourges (France) for the work *.WAV.
In June 2014, he received a PhD in Fine Arts from the UPV / EHU, with the thesis: Space and the dimension of sound, an observation from artistic experimentation. 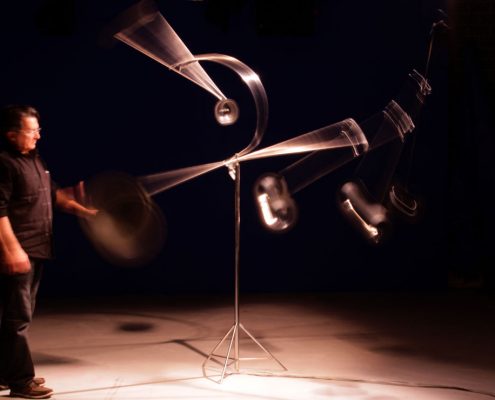