Alexander Rechberg (Germany, 1983). After studying computer science in Bonn, he attended the Academy of Media Arts Cologne (KHM). In his studies he has worked on experimental computer science and mainly worked on interactive pieces, focusing on the intersection computer-generated elements and human influence.

Daniel J. Becker (Germany, 1984). Lives and works in Cologne, where he also studied at the Köln International School of Design. As a freelance Designer, he uses programming for generative design of audiovisual and interactive projects and artworks.

Michael König, (Germany, 1984). Lives and works in Cologne and has completed a degree at the Academy of Media Arts Cologne (KHM). He works with a special focus on spatial media design for exhibitions, film, television and theater.

David Murmann (Germany, 1985). Studied computer science at the RWTH Aachen and has since lived and worked in Cologne. He works for btf GmbH in the areas of software development, computer graphics and technological development. 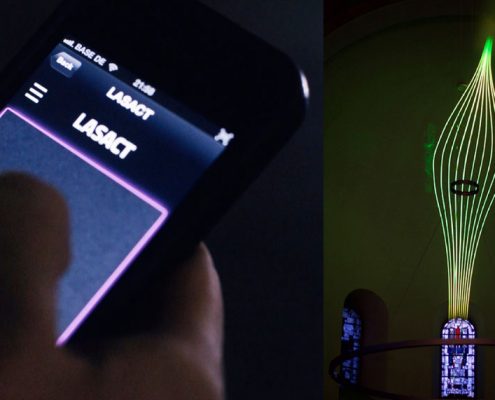 LASACT is an interactive installation of light and sound. Visitors have the opportunity to modify the visual appear ...