Meri Ekola received her M.A. in lighting design from the Theatre Academy of the University of the Arts Helsinki. She has gained experience by working in the wide field of performing arts and architectural lighting design. Her work as a lighting designer has led her to question the expressive limits of lighting. In recent years, she has concentrated in working on a lighting design able to carry an active part in the performance, as taking on the role of a performer. This has led her to experiment with the medium of light in an installation context. Her latest collaborators are Hotel Pro Forma and Opera de la Monnaie de Munt amongst others.

Marc Melià is a Catalan composer based in Belgium. After finishing his musical studies at the Conservatory de música de les Illes Balears he has been performing live worldwide with several musical ensembles and recording albums, and for several labels including cult Belgium label Crammed Discs. In recent years he has focused on developing his solo career based on musical creation, using mainly synthesizers and tools to manipulate the sound electronically. 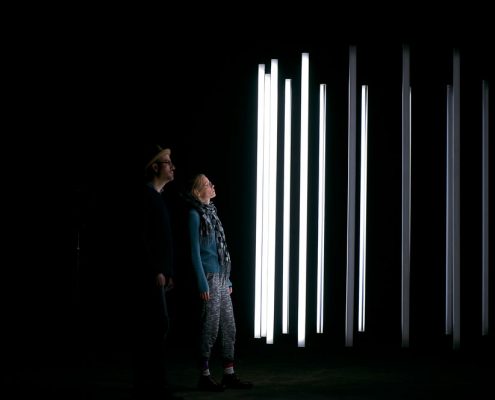 A light and sound installation that reflects the intrinsic relation between the perception of auditory and visual s ...